I've just finished a Tink rolling chassis for a customer, and it's due to leave tomorrow. He's already made the rear pony truck, and will also receive the smokebox door, brake blocks and chimney base and top castings with the chassis. 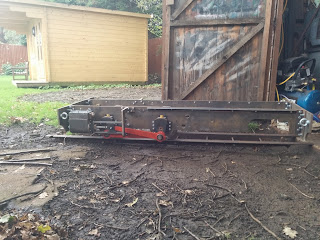 The rolling chassis I'm building is now nearly complete. The cylinders are on, as are the motion plates and slide bars. That just leaves the piston rings, conn rods and retainers and she's ready to go. Her owner is going to collect her early December.

I have machined the fairlie smokebox door back, and have started to work in the hinges etc. I want these to be stainless as Tal's are bare metal, and quite characteristic.
Posted by Peter at 10:57 No comments:

This month I've started to assemble the rolling chassis I'm building for a friend's tinkerbell. I have all the parts ready, it's just (ha! just. . .) a matter of assembling them. So, in a couple of days work, the frames are together, the wheelsets are in, the cranks quartered and the coupling rods are on. Next week (hopefully) the assembled cylinders will go on, followed soon by the motion plate, slide bars, crossheads and connecting rods. At that stage, it can go to its owner, who wants it by the end of the year.

The fairlie has also seen some progress - I have completed the reverser (which I ended up shortening a bit so that it would fit comfortably under the regulator handle), and machined the brake and reverser shafts. I also had the handbrake wheel laser cut - Tal has just a wheel, no handle on it, which is good for me because I'm using a handbrake cable to be flexible on to the bogie, and I don't want people to be able to over tighten it and stretch the cable. Hopefully this lack of handle will mean people can't over tighten it. This had a bit of machining done to it to round off the edges. I have also welded the sandpot base on to the front of the tank.

I got the flexible steam pipes for her from Pirtek. Unfortunately, when I measured up on the chassis there wasn't as much side play available for the exhaust pipe as I'd like, so I've had to dis-assemble the live steam feed to the cylinders, and order some more parts so that I can move it an inch further left. She should never go round corners that sharp - but I don't want any problems.
Posted by Peter at 11:53 No comments: 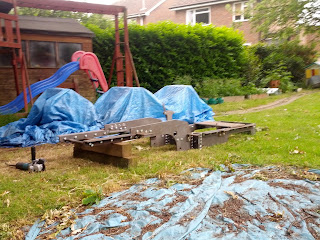 I have also recently completed her sandpot (every Fairlie needs a sandpit at the front of its tanks). The top and bottom were turned from aluminium. 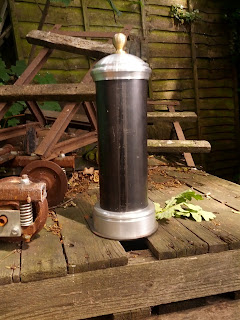 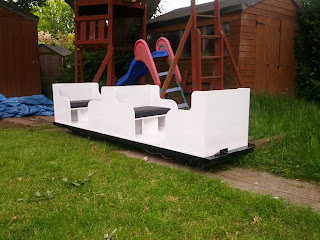 We don't just build locomotives - pictured here is a coach (in primer) just completed for a customers garden railway.
Posted by Peter at 07:37 No comments:

The Tinkerbell cylinders are now done, so it's time to get them on the frames. 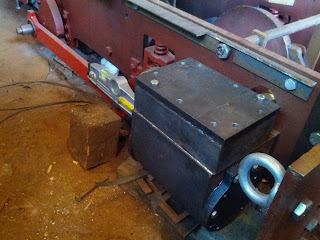 The two sets of Tinkerbell cylinders are nearly done. Today I fitted the piston and valve rod glands, just leaving valve rod buckles, gaskets and fixing bolt holes to do. Hopefully these will get done next week, and the first pair on their frames early the week after. Meanwhile, I have fitted the Fairlie drop links, so that's moving on too!!
Posted by Peter at 17:34 No comments:

The diesels have both been and gone, converted to 6.5hp electric start petrol engines. They are a lot smoother, and also benefit from being common in everything except shape!!! The fairlie power bogie valve gear is complete except from the eccentric rods and drop links for the reversing gear. It also needs the drain cocks fitting, but, apart from that, it's done. The frames arrived from the cutter a few weeks ago now, ready for when space allows them to be put together. But first, I have a tinkerbell and a rolling tinkerbell chassis to complete. The two pairs of cylinders for these are coming along well, the pistons are made and fitted, work now concentrating on fitting the rear covers, then glands, and fitting the valves to the valve rods, all the gaskets and then they can be fitted to the frames. That will be real progress!!!
Posted by Peter at 14:16 No comments:

It's been a while

It's been a while since I updated this blog, so it's probably a good time to do that now.

The single fairlie power bogie has got its connecting rods on, plus valve guides, combination levers and union links. More recently, I have mounted the lubricator and fixed up a drive system for it, and also made the left hand side radius rod, which is now fitted. So that leaves the right hand radius rod, return cranks and eccentric rods and the valve gear is complete. However, she probably will take a back seat for the next few months, as work on other people's locos proceeds.

The tinkerbell rolling chassis I'm building - well, the two wheelsets are now made up and ready to go. The castings have arrived, and I've started to machine the cylinder blocks.

Later this month, two diesels are coming in for re-engining to petrol - apparently the driver has no fillings left so wants the change!!!
Posted by Peter at 16:14 No comments: